Markets in a Minute - Ukraine

The Russian invasion of Ukraine has humanitarian and geopolitical consequences but what are the implications for the global economy and equities? The latest Markets in a Minute explores this question and more.

Markets in a Minute: Ukraine

When President Vladimir Putin rose to power in 1999 — nearly a decade after the Soviet Union’s dissolution — many Russians lived in grinding poverty, and the country was grappling with its diminished standing in the world. The invasion that shocked the world and roiled markets last week is largely an attempt by Putin to reclaim Russia’s standing.  Western governments are betting that the financial pain of sanctions and global isolation will be enough to send Putin’s troops back to Moscow.

Looking back at previous periods, the S&P 500 has tended to rally in the wake of an invasion.

Often stocks will decline in anticipation of war or other calamitous event, only to increase once the event actually takes place. This type of pattern has given rise to the Wall Street adage “sell the rumor, buy the news.”

S&P 500 Before and After Invasions 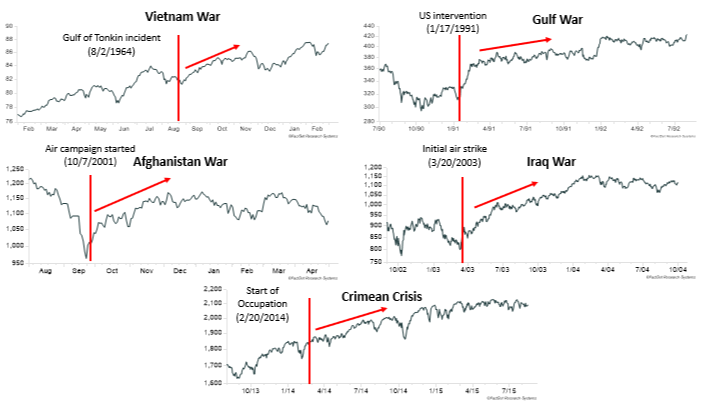 Past performance is no guarantee of future results. Indexes are unmanaged and not subject to fees.
It is not possible to invest directly in an index. Index: S&P 500; Source: Factset

While it may be hard to tell from the headlines, U.S. markets have not been significantly affected by the invasion.

Past performance is no guarantee of future results. Indexes are unmanaged and not subject to fees.
It is not possible to invest directly in an index. Index: S&P 500; Source: Factset

Volatility, as measured by the VIX index, is elevated, but still well below levels registered in March 2020 and other crises.

VIX Index, a measure of volatility in the equity market

Past performance is no guarantee of future results. Indexes are unmanaged and not subject to fees.
It is not possible to invest directly in an index. Index VIX; Source: Factset

Oil markets are most impacted by Russia’s invasion of Ukraine. But the pain of higher energy prices may not be felt equally:

Russia, Saudi Arabia and the United States are the world’s three-largest oil-producing countries, respectively. According to Statista, Russia accounts for more than 12 percent of global crude oil production. Europe is a large net importer of energy and gets an estimated 40% of its natural gas from Russia. That said, other factors have exacerbated the recent surge in energy prices, including the after-effects of the pandemic, unseasonably cold weather and declining nuclear power capacity.

Oil has been rallying since the March 2020 bottom and is back to 2014 levels. Since the Russian invasion began, Brent Crude Oil, the standard most commonly used in Europe, is up a relatively modest 3%. 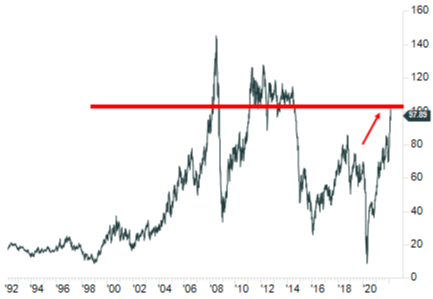 From a military standpoint, Russia has plenty of might, in terms of troop strength, weaponry and technological power. But wars are very costly, and the country only has so much economic firepower to pursue its ground invasion:

Putin has been de-dollarizing the Russian economy for years, likely in anticipation of recent actions. Last year, the country had an impressive current account surplus of $120 billion, plus gold and foreign-exchange reserves of almost $650 billion.

Under normal circumstances, that would be ample firepower to support the Russian economy in times of stress. But these are no ordinary times, and the West has enacted more punitive measures that Putin had likely anticipated. Without access to the global financial system because of sanctions, Russia is not able to deploy a large portion of those reserves.

A report directly from the Russian Central Bank shows the breakdown of Russian reserves. Interestingly, the report was removed from the internet but has been preserved elsewhere. Notice that U.S. dollar reserves dropped significantly in the last year, continuing a trend that had been started years earlier. Because of sanctions, U.S. dollars, pounds sterling and euros are all now effectively unusable, leaving Russia with less than half of its war chest.

Bank of Russia Foreign Exchange and Gold Assets by Currency* 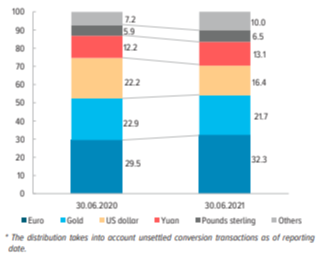 The Russian economy is already showing signs of distress.

Last week, the country’s stock market lost more than a third of its value in one day, the ruble hit a record low against the dollar and sovereign debt yields surged.

Global markets are currently suggesting that Russian debt is at very high risk of default. One measure of that risk – credit default swap spreads – were already rising before the actual invasion and have blown out in the last few trading days. 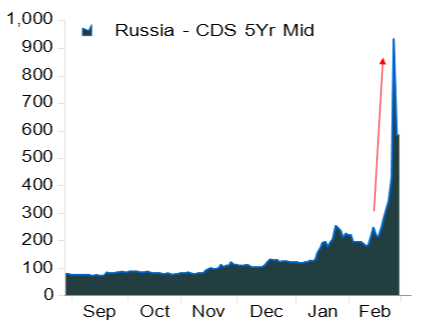 The Russian stock market has plummeted. Last week, Moscow banned short-selling and then closed the stock market altogether, tactics governments sometimes use in times of tremendous stress to slow fast-falling markets. Despite these measures, the market is down more than 50% in just two weeks. 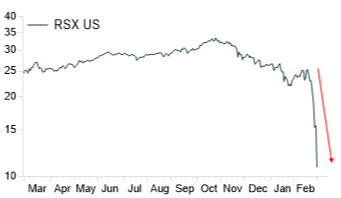 ETFs are subject to market fluctuation and the risks of their underlying investments. Before investing in any exchange-traded fund, you should consider its investment objectives, risks, charges, and expenses. Source: Factset

So, what does all this mean for U.S. investors?

Russia’s invasion of Ukraine adds to the uncertainty that has weighed on U.S. stocks since the start of the year. But the most-important drivers of market performance are U.S. economic fundamentals, which remain strong, and the ongoing Federal Reserve rate-tightening cycle.

While higher energy prices complicate the Fed’s job, the central bank had already shifted into inflation-fighting mode before the Russia/Ukraine conflict erupted. So, the situation is unlikely to make the Fed more aggressive in the near term. Ironically, higher oil prices, which tend to dampen consumer spending on discretionary items, may help to cool economic activity and thus take some pressure off the central bank to withdraw liquidity quickly.

Either way, a well-diversified portfolio will have limited exposure to Russia. And, if history is any guide, the market downturn exacerbated by the invasion may prove to be a good opportunity to buy U.S. stocks.