Markets in a Minute: Fixed Income

Buffeted by twin headwinds — rising interest rates and high inflation — the fixed-income market is off to a rough start this year. In the current climate, many investors may be tempted to forgo fixed income entirely. Read about the reasons for continuing to invest in bonds in the latest Markets in a Minute.

Markets in a Minute: Fixed Income

The sometimes-sleepy bond market has been anything but this year. With inflation at its hottest level in decades and the Federal Reserve beginning to raise interest rates, the U.S. Treasury index had its worst-ever start to the year, falling by 6% through March 22. Adding to the list of concerns: bonds declined in tandem with stocks, meaning that bonds didn’t provide portfolios the cushion in volatile times that investors often rely on them for.

With more rate hikes on the horizon, investors may be tempted to avoid fixed income altogether. But historical precedent suggests that, even with these headwinds, bonds can still provide positive returns.

Amid such headwinds, why bother with bonds?

How Bonds Have Performed When the Fed Was Raising Rates 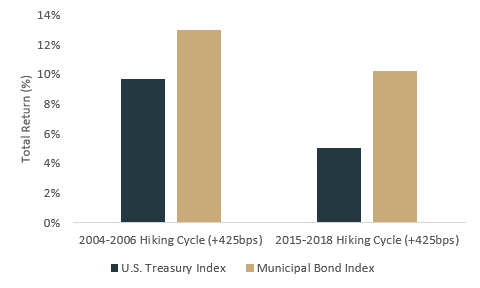 Past performance is no guarantee of future results. Indexes are unmanaged and not subject to fees.

It is not possible to invest directly in an index. Indexes: U.S. Treasury Index, U.S. Municipal Bond Index. Source: Bloomberg

It’s important to keep in mind that long-term bonds — or those with maturities of more than 10 years — are more sensitive to changes in interest rates than short-term bonds. So, diversification across maturities (as well as sectors and credit risk) can help to mitigate portfolio risk during periods of market volatility.

For consistent, long-term minded investors, rising rates may even present an opportunity for investors whose fixed-income holdings are diversified across different maturities. In such an environment, as individual bonds with lower yields mature, the proceeds can be used to buy bonds with higher yields. Those new bonds bring with them higher levels of interest income and potentially greater total returns. In other words, rising rates may create some short-term pain but ultimately translate into longer-term gains.

So, while investors worry about owning bonds in a rising-rate environment, there may be risk in forgoing fixed-income entirely. For a better understanding of how bonds play a role in your portfolio, don’t hesitate to reach out to your financial advisor.